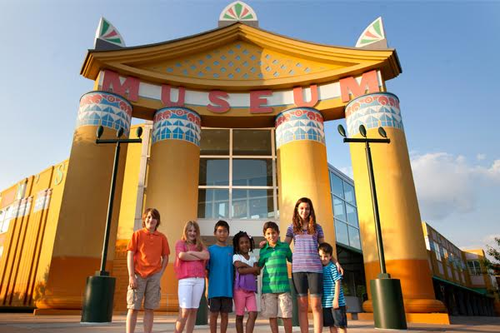 SEASONS OF SHARING IN MULTI-CULTURAL HOUSTON: NOV. 7, 2015 - JAN. 3, 2016
Holidays celebrated throughout the world will vibrantly burst under one roof with our annual Seasons of Sharing exhibit. Ramadan, Diwali, Hanukkah, Las Posadas, Christmas, Kwanzaa, and the Lunar New Year will be represented in Houston’s only multicultural holiday exhibit for children. These seven celebrations will come together in a block-long ""neighborhood"" of houses in the Museum, lighting the way through the holiday season!
THANKSGIVING WITH SANTA: NOV. 25, 2015
The Children's Museum of Houston is excited to host its 10th annual Thanksgiving parade. This two-part event will feature an indoor parade followed by a meet-and-greet with Santa! Bring your wish list and camera! Learn More.
MEET SANTA AND HIS REINSTEER: NOV. 28, 2015
It's the holidays with a Texas twist! Pull on your boots and come hear the sleigh bells ring from live Texas reinsteer's longhorns. Make reinsteer “antlers” to wear, hop on Santa’s sleigh and snap a pic with Santa and his reinsteer. Bring your camera! Learn More.
PICTURES WITH SANTA: NOV. 28, DEC. 19, AND DEC. 24, 2015
Ho, ho, ho! Visit the Children's Museum of Houston in November and December for a picture with old Saint Nick!
STAR WARS TAKEOVER: DEC. 12, 2015
Luke Skywalker, Princess Leia, Han Solo, Chewbacca and R6-D1 will make a special holiday appearance at Children’s Museum of Houston! Come dressed as your favorite Star Wars character and enjoy special activities,  just in time for the premiere of “Star Wars: The Force Awakens.” More details to come!
SANTA AND HIS REINDEER: DEC. 20, 2015
Hop on Santa’s sleigh, snap a pic with old Saint Nick, get and up close and personal with his reindeer! Bring your cameras! Learn more.
SNOW QUEEN VISIT: DEC. 26, 2015
Have a ball and welcome the winter season with the Children's Museum of Houston and the Snow Queen herself! Learn more.
ROCKIN' NEWS YEAR'S NOON: DEC. 31, 2015
Join the Children's Museum of Houston for Houston's Rockin' New Year's Noon Bash, the city’s longest-running New Year’s Eve celebration just for kids!  Learn more.
Don't forget to shop for presents while you are at the museum. Fiddlesticks will be open during the holiday season.
http://www.cmhouston.org/holidays
ADVERTISEMENTS

Hi I'm Leah, I'm a wife and a mom to a little girl, almost 4. She pretty much runs our house and social calendar. :) I'm a born and raised Houstonian, I love to travel, dine out, and explore all North Houston has to offer with my little one. I have a passion for helping people stay active with their kiddos. On our Mac Kid site we will keep you updated with events and opportunities happening in the North Houston area. Julie is a Mom of 2 beautiful kids and a Houston local.  She loves helping othe…